An Introduction to the Rum Runners Tour 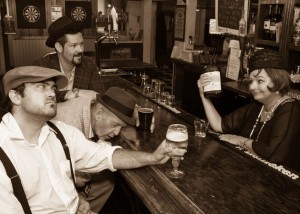 Prohibition was a wild and hysterical age filled with glamour and excitement difficult to match at any other time in history. It spawned the birth of speakeasies, flapper girls and blind pigs. Gangsters fought to secure a share of the illegal liquor business and mobsters like Al Capone relied on Windsor as the main supplier.

“Benny Da Weasel” will guide you on your tour. That is until the police show up and Benny skips out on you to avoid being caught.

Learn… the secrets used by bootleggers to smuggle liquor across the Detroit River and see where they hid out.

Enjoy… one of the famous riverfront roadhouses and be greeted by the legendary Bertha Thomas who served many Hollywood movie stars and some of the most notorious gangsters at her very popular Edgewater Inn.

Visit…the church made famous by “The Fighting Parson” and meet the gun-toting Methodist Minister.

View… the mansions in Walkerville paid for by rum running profits. The Rum Runner’s Live Action Tour will tell the story of prohibition and Windsor’s connection to Chicago gangsters like Al Capone and Detroit’s Purple Gang. You’ll learn how everyday people like taxi drivers and newspaper vendors became wealthy entrepreneurs. At several locations you will disembark the bus to intermingle with the characters and lunch will be served at one of their famous haunts.